The skill of leading other people in combat situations. A skilled leader will be more aware of the battle field, and can inspire others to perform better than they normally would.

The leadership skill allows a group of players to form a squad, which, depending on a number of factors, will provide different bonuses. A squad can be further divided into smaller fireteams within the squad. For each fireteam there must be a fireteam leader (FTL), and for the whole squad there must be one main Squad Leader (SL). SL is designated FTL with ability to manage (invite, move, kick) squad members.

Squads follow a tree-like structure. At the root is the Squad Leader, and each fireteam in the squad is a separate branch, starting with the Fireteam Leader, and all the soldiers within that fireteam being leafs on the FTL branch, so to speak.

To be a FTL, you need at least 100 leadership skill and at least 1 soldier in your team.

Benefits of forming a squad

There are multiple benefits of forming squads. The most important one is the leadership boosts that are given by the FTL to the soldiers. Each FTL can provide a different combination of boosts.

Apart from the leadership boosts, everyone in the squad can see each over even if the squad has no legit SL and FTL.

Each Fireteam Leader can activate up to three different memory modules at a time, so a leader will need at least one player in his squad on the same map to activate it. The modules are activated using the cheapboy, but they have to be unlocked before they can be activated. Currently, memory modules can be found as random loot in the core. Some rare modules can be found in dungeons. Using a module will unlock it so that it can be activated later. Once you have unlocked a module, you will never lose it.

Each active memory module will provide a boost of some kind to the FTL and all his soldiers. The strength of the boost depend on four things:


The "Potential Boost" (PB) is a number between 1 and 20, determining the relative potential strength of a boost. The higher the better. The PB depends on the charisma and leadership skill of the FTL. The "Actual Boost" (AB) is the final boost that is applied to a character. It depends on the Base Boost (BB), the Potential Boost (PB), and the charisma of the character that will receive the boost. 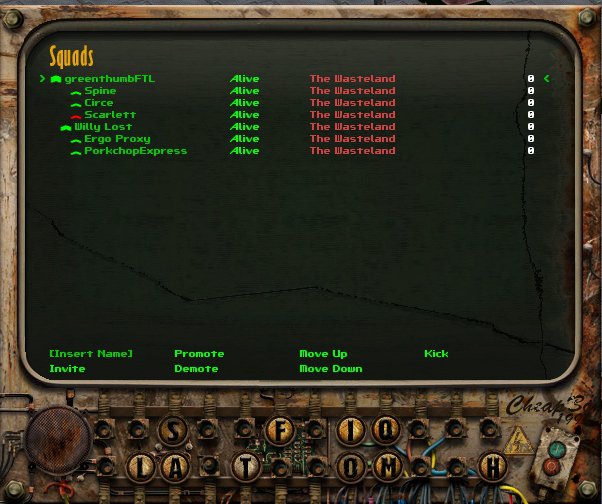 If SL or FTL have no alive soldiers in squad present in their area, they don't get bonuses for themselves. If FTL has not formed team, he's considered as member of SL team. No other requirements and conditions to get bonuses are currently present.

The only difference between them: SL has ability to manage the squad, see all members of the squads and see what all sneakers in squad see.

All current effects described, there is no any different effect present. greenthumbFTL has own activated bonuses on himself. Spine and Circle would get bonuses from greenthumbFTL. Scarlet has no bonuses as she's at the different zone.

Willy Lost has own activated bonuses on himself. Ergo Proxy and PorkchopExpress has bonuses from Willy Lost as they are at the same zone with FTL.